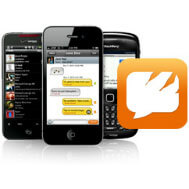 FlexiSHIELD and Tiger Text - Which One Would Have Saved Tiger Woods


Congratulations to the Tiger Text team, who have released a cool new product for iPhone.

It's inspiring to see innovation and success, but with all the great publicity Tiger Text have been getting, our customers were confusing Tiger Text with our FlexiSHIELD product. Following the media interest, we have been receiving a deluge of e-mails asking us to explain the difference between FlexiSHIELD and Tiger Text as they both apparently appear to be cell phone programs offering the same benefits. This impression was compounded by the coincidental timing of the announcement of our Tiger Woods Inspired Edition of FlexiSHIELD .

No ones fault, these things happen.

Without Our Customers, We Are Nothing

Tiger Text is a proprietary messaging system that stores messages on a central server, and will delete the message after between 1 - 30 days. To communicate, both parties need an iPhone running the Tiger Text application to access the server to read themessage, if it is still there. The iPhone requi res an active Internet connection and parties need to have the Tiger Text application installed and running.

Tiger Text does not use regular SMS, the Tiger Text application is visible to anyone looking at the phone. You also need to give Tiger Text your phone number to use their application.

FlexiSHIELD is a standalone application that you install on your Nokia or Windows Mobile smartphone. It will automatically block all notifications and hide any incoming or outgoing SMS, MMS, E-MAIL, or Phone calls in an invisible vault on the phone itself. When installed and activated, there is no indication of the application, or that any message or call has been received. There is no server, no internet required, and anyone can send or receive messages or calls to and from the FlexiSHIELD device.

HOW WOULD BOTH PRODUCTS WORK FOR TIGER WOODS

We have the utmost respect for Tiger Woods, but now that he has publically admitted to his affairs, let speculate on how these products could have helped him avoid such a terrible trial-by-tabloid. Let it be said that my personal opinion is that Tiger Woods has been vilified for simply being a red blooded male. While I can't say that it was right for him to allow his hormones to hijack his behavior, which one of us heterosexual men would not do the same in the time it takes to sink a putt!

Tiger Woods is a finely tuned athlete, with hot women throwing themselves at him. Throw off the feminazi oppression and speak your mind guys, of course you would.. in a heartbeat!

Let's imagine if Tiger Woods's wife was standing there next to him while he received an SMS or MMS message? Would she have asked who was sending the message? With FlexiSHIELD she could've been sitting on the phone and never would've realized that there was an incoming message. FlexiSHIELD would've have blocked any alert tones or vibration alerts from occurring as well as redirecting the SMS message to a secret vault within the phone for later viewing.

Tiger Text would not have saved Tigers bacon in this case.

Perhaps some pretty blonde that Tiger Woods met the previous night, decided to call him the next day to tell him what a great time she had, and could she get tickets for the Golf Open. If Tiger Woods wife Elin was there, and Tiger just decided to reject the call, would she not be just a little suspicious? And if it continued to ring several times while they were shopping at the mall, what would she think, and how would he feel? FlexiSHIELD would have simply and silently rejected that call, and made a record of it in the secret vault.

In this case Tiger Woods would have been toast, and Tiger Text could not have come to the rescue.

It has been reported that Elin picked up Tiger Woods phone while it was unattended, and the discovery of what she saw led to the family car being totaled and Tiger suffering wounds inflicted by a golf club!

Had Tiger Woods had FlexiSHIELD installed, his wife Elin would've been none the wiser if she picked up the phone and scrolled through it. The messages would have still remained invisible without even the smallest hint that there were any incoming messages from the numbers specified by Tiger Woods to cloak.

If Tiger Woods had Tiger Text, she would have seen the application and this could have certainly caused suspicion - after all, she was looking thru his messages.

Privacy is the issue at hand, but with TigerText the person receiving the message must also have the application installed on his phone. Apart from this, TigerText will constantly send SMS alerts telling the receiving party to download the program to their phone. This is neither inconspicuous nor stealth.

Tiger Text is a great secure Instant Messaging alternative, but is not an SMS or phone call cloaking software.

FlexiSPY is a personal information security that uses the principle that the best form of security is simply to be invisible at all times. If there is nothing to attract attention, there is no possibility of a thief, friend, or business colleague compromising your security by noticing a key lock or strange application.

We hope that this answers the questions that we are getting about Tiger Text and FlexiSHIELD.

Learn more about the Tiger Woods inspired version of FlexiSHIELD.